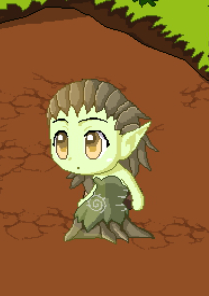 Saplette is one of the Monsters in the game Prodigy and can be found in Firefly Forest. Over the years, wizards have had very mixed opinions about the Saplette. Some capture them for show, some treat them like any other pet, and some use them to build up either an army or simply a good squadron and fighters. The capabilities of a Saplette are very high, as they are as tall as your Player and often learn very fast.

Culix praised the Saplette often in his works. He often thought that, for instance, they made good companions when he demonstrated a Saplette in The Tales of Hapless Headless Heath offering to give Heath information about the drunkard he was pursuing that had taken his head, and quoted from The Journey of Monsters that they "made good companions and even to the most petty TripTrops unite them under leadership if to form a militia in order to make an attempt to assassinate a wizard or other target".